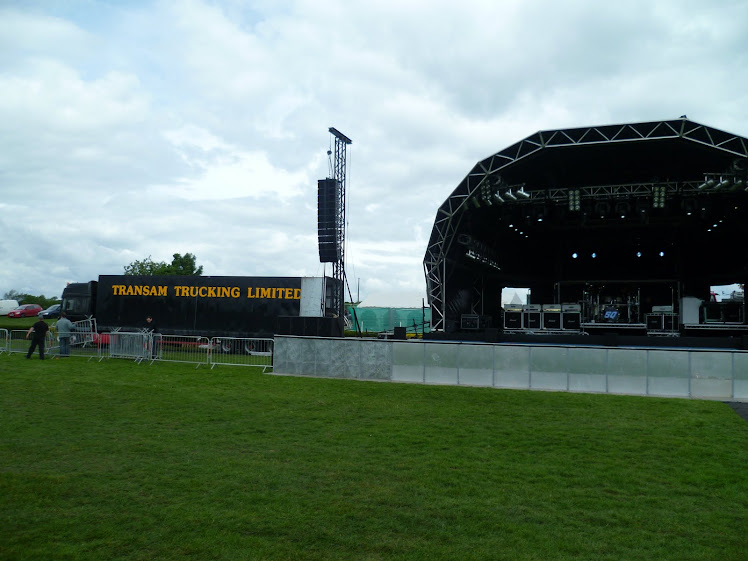 So here we go Europe here I come, after collecting some of the equipment from a warehouse in South London that had been getting serviced, its straight down to Dover, Sweden here I come, not a bad journey and after a stop over at Nobie's Truck stop (The Netherlands)
I arrive in good time Status Quo are doing a corporate gig its very hush hush as its going to be a surprise for all the guests, as to who the band will be,easy you would think only problem is all of our flight cases that carry the equipment has got Status Quo all over it, so its out with the black duck tape and cover any thing which may give away our identity !!! this was managed successfully as far as I know and every one had the most wonderful time.
OK so its Sunday night I am in Sweden and I have got four days to get to Denmark,now for those of you who paid attention to your Geography teacher " I cant include myself in that " you will know that Denmark is next door to Sweden "nearly" separated by a little bit of the Baltique which is very easily crossed by either the bridge at Malmo or the ferry from Helsingborg, as I was not pushed for time I take the bridge option and in two and a half hours I am parked up at the congress center in Odense, this is my home for the next four days, I wont bore you with my daily routine, of passing the time only to say I brought myself a Banjo which I am attempting to learn and not wishing to sound to smug I cant tell you that "Frere Jacquer" lets just say I own it !.... Old McDonald is proving a bit more tricky but watch this space.
﻿﻿﻿
﻿﻿﻿ So its gig day at last and I move up to the venue site after having done a recce by bike the day before only to discover that the venue is ..well very unusual! Its actually a working museum and the most amazing place its a working farm all buildings have been relocated from all over Denmark and rebuilt on the site creating a complete village that you would have believed had been there for the last three hundred years complete with a Mad Goose.
﻿﻿
﻿﻿

The gig was to take place in a grass lined Amphitheatre, to the rear of the ancient village and because it was an ancient village the access was never intended for 40ft articulated vehicles, therefore we had to cross load all of the equipment on to three small vans which ferried to and fro until all the equipment was deposited where it was needed,and the same on the load out .
The gig was great the weather was not the best but there was a lot worse weather to come but then ignorance is bliss as they say!
Even through the weather was not great the setting made up for it and as is normal with followers of the Quo no one seemed in the least bit bothered by the rain and there enthusiasm was full on from start to finish.
So its off to Sonderborg only an hour and forty five min's away still in Denmark, which turned out to be a very wet and pretty muddy, mostly due to the building works, which where on going in and around the Amphitheatre, expanding the venue to accommodate more people.That said the gig went well even if it was a very wet one,but once again the fans where UN-perturbed and trudged in through the mud and rain straight to the Beer stall and then partied on as if it was the beach at Marbella, you got to love the tenacity of the Status Quo Fans they "ROCK ".
So now its off to the Netherlands and another four days to kill (Banjo Banjo) finally gig day  its the Daewpop Festival in Hellendorn not far from the German boarder at Rheine.
And to cut a long story short.. well it was bloody marvelous the gig was big the crowd of about six thousand where brilliant as was the weather Andy May Pat Marks & Tim Franklin wielded there wands of sound and light tweaking and fading equalising and all the other amazing little expert touches that allow The Mighty Quo to look and sound even more amazing than ever,Brilliant.
Then I am off again, this time it Switzerland, I am heading for  the Stars of Sound, Aarberg festival.
Once again I arrive in the most unexpected venue, this time its the central market square, that has been turned over for the weekend to House a huge stage and the Legends which are Status Quo. Wow what a place very very pretty indeed and very Swiss as only Switzerland can be.
Back stage I am talking to Francis and Rick and they tell me that its, the last hour before the gig that's always the worst the fans, are here the place is buzzing, the nerves are building and all they want to do is get on that stage and do what they do best Rock out.
Finally the moment arrives and they take the stage to rapturous applause, they are three songs in and mother nature reminds us all who is in charge.
The wind rises thunder claps lightning flashes and the RAIN, the RAIN comes down in a torrent, four thousand people with nowhere to hide, "do they care!" do they hell they sing louder, they clap louder, and they scream louder. Meanwhile on stage its drama time the strong wind lifts the back drop, its flying and flapping inches from Matthew Letley The Drummer's head, he like a true professional continues never missing a beat literally, while Glen Smith Myself and others leap on to the offending piece of scenery and hold it down, Glen being a very busy man has to go and take care of something for the local promoter, I then stretch myself out along the length of back drop that I am clinging to for dear life against the elements. By the end of the show I am soaked through to the skin literally, but the moment when Rick Parfitt moved from one side of the stage to the other, passing by me and looking down commenting with a cheeky grin " Drunk again Russ" made it all worth it. Glen later returned patted me on the back and said you took one for the band there mate. I did and it was bloody great I don't even think any of the crowed even noticed,Job done.
Posted by Russell on the Road at 12:30 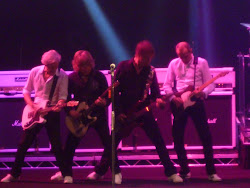